Will 2012 go down as the warmest year on record? We’ll find out soon

Sometimes semantics are important. And sometimes they’re down right silly.

U.S. weather gurus are telling us this year will go down as the warmest…not the hottest mind you…the warmest year on record since we kept records on such stuff. Somehow this assessment leaves me cold!

If I knew the first thing about meteorology, I’d go on record with something straight forward like, “2012 was a so-so climate year – some say it was warm a lot – but hardly anything worth recounting so let’s move on to the next news story…” 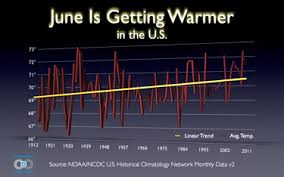 “A warm winter, a record warm spring, a record hot July and a warmer than average autumn combined to make it even more likely that 2012 will go down as the warmest year in the contiguous United States on record, the federal government reported Thursday. Just how likely?

"For 2012 not to be record warm, December would have to be unprecedented," Jake Crouch, a scientist at the National Climatic Data Center, told NBC News. "December temperatures would need to be more than 1 degree F colder than the coldest December on record, which occurred in 1983."

Based on past numbers, he added, "the odds of that occurring are less than 0.3 percent."

In other words, he said, "2012 has a greater than 99.7 percent chance of being record warm." That's up from Crouch's odds just last month of 90 percent.

January-November was already the warmest first 11 months of any year in records that go back to 1895, according to data released Thursday by the National Oceanic and Atmospheric Administration, which oversees the center. The average national temperature through November was 57.1 degrees F. 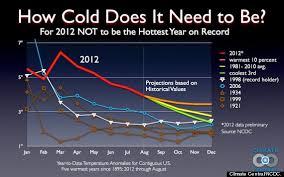 The year has had a string of warm events, Crouch noted. "We had our fourth warmest winter (2011/2012) on record, our warmest spring, a very hot summer with the hottest month on record for the nation (July 2012), and a warmer than average autumn," he said.

"The warm winter and spring were associated with an unusually northern track of the jet stream, which kept cold Arctic air out of the contiguous United States," he added. "The early start to spring was a precursor to the summer drought. The large size of the summer drought was associated with a large area of the country experiencing a very hot summer. Those conditions continued into much of the fall season."

"When you put these local and regional factors on top of a warming trend for the contiguous United States and the globe," he said, "the result has been the warmest year on record for the Lower 48."