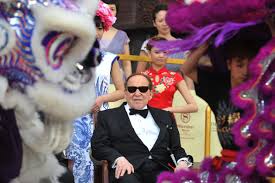 Why did he do it? Why gamble over $53 million on a political candidate?

Some people believe the top reason Sheldon Adelson had for backing Romney and opposing President Barack Obama was self defense. His company, the Las Vegas Sands Corp. was being investigated by the feds and he felt Romney would take care of that little probe. You know, make it go away.

Adelson told a conservative columnist that a second Obama term would bring government “vilification of people that were against him.” He was sure he’d be at the top of that list. Maybe he’s right.

In the 2012 campaign, Sheldon Adelson was the Republican Party's biggest contributor - by some estimates the largest political donor ever. He donated millions to Mitt Romney’s campaign - a political gamble that did not pay off.

Adelson's problems with the feds began with the sacking of Steve Jacobs in 2012. He was the head of Sands' Macau operations. Jacobs fired back and filed an unfair termination lawsuit in October that year, alleging that he was asked to do improper things.

That in turn seems to have triggered in early 2011 the SEC and Justice Department investigations under the Foreign Corrupt Practices Act.

As Jacobs’ case ground its way through Nevada courts, the allegations have become increasingly lurid - claiming that Adelson personally approved a "prostitution strategy" for his casinos, had triad links, and made questionable payments to Chinese government officials. The latter accusation related to the employment by Sands of a well-connected local official.

Adelson has strongly denied the claims. Sen. John McCain suggested in an interview that Adelson's reliance on profits from foreign (and in particular Chinese) casinos provided a route for foreign money to enter the election campaign. "Obviously, maybe in a roundabout way, foreign money is coming into an American campaign," he told PBS.

Stay tuned. I suspect there’s going to more news on the man who tried to buy the presidency in the coming months.

That was a pretty ballsy move on his part though. He really thought he can buy his way through the presidency. He'll definitely be on the news for a few weeks.