Blast from the Past: America in Crisis: Are we preparing for martial law? 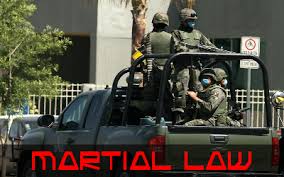 The Most Viewed story on the Times-Standard today is a column I wrote four years ago. Someone did the Scopes thing to check out my claims. They found out they were true. It’s interesting to me that this subject has resurfaced four years later.
Here’s a current story about the subject. Warning, the author of this blog is kinda “out there” and makes accusations that are questionable. Nevertheless, there’s plenty of people who believe that someday Martial Law will be enacted in all 50 states and all of our liberties will be taken away. I have my concerns, but I’m not as alarmed as some people. Now my column:
By Dave Stancliff/As It Stands/For the Times-Standard
Created:   10/05/2008 01:35:40 AM PDT
As we watch corporate America stagger financially, and the polarized politicians try to respond, there is something else going on that we all need to be aware of.
For the second time since Katrina hit in August 2005, an active Army unit --1st Brigade Combat Team, 3rd Infantry Division -- has been set up to quell civil unrest and do crowd control within our borders. And this time it's a permanent mission.
The last time I checked, the use of the military in domestic activities was prohibited by law, with the exception of the National Guard units under the authority of the states. So what's going on? A recent report in The Army Times -- “Army Unit to Deploy in October for Domestic Operations” discussed a new military unit that is now stationed in the United States of America.
The report stated that the 1st Brigade Combat Team would be deployed within the country and would work with civil authorities to “put down civil unrest.” On the surface this may seem benign, but this mission marks the first time an active military unit has assigned to NorthCom, the joint command established in 2002 to control federal homeland defense efforts and coordinate with civil authorities.
The unit is under the daily control of U.S. Army North, NorthCom, the Army component of Northern Command, and is now on-call for natural or manmade emergencies and disasters, including terrorist attacks. The Army says this mission is ongoing
and active duty units will be rotated in and out of the country. The commander of this unit, Col. Roger Cloutier, also said that his troops will be trained to use nonlethal weapons designed to subdue unruly or dangerous individuals without killing them.
This is another first; the first time a nonlethal package has been fielded the Army, according to Cloutier. Why does that make me uneasy? The package includes equipment to raise a hasty road block, spike strips for slowing, stopping or controlling traffic; shields and batons; and beanbag bullets.
The Army's new “dwell-time” mission will be part of a force that includes elements from other military branches and dedicated National Guard Weapons of Mass Destruction-Civil Support teams. It doesn't stop there. There will be Air Force engineer and medical units, the Marine Corps Chemical, Biological Initial Reaction Force, a Navy weather team and members of the Defense Logistics Agency and the Defense Threat Reduction Agency.
According to an Army Times interview, Col. Louis Vogler, one of the chiefs of NorthCom future operations, said, “Right now, the response force requirement will be an enduring mission.” I guess that's clear enough.
What's troubling, among other things, is the man appointed as commander of NorthCom, Victor E. Renuart. “Why you ask?” According to Wikipedia, Mr. Renuart: “oversaw the planning and execution of all joint and allied combat, humanitarian assistance and reconstruction operations for Operation Enduring Freedom and Iraqi Freedom.” This was the person who was in charge of all the completely chaotic, ineffective, and dangerous “operation” in Iraq and he will now be in command of this new unit in our country. How comforting is that?
The manual dealing with Consequence Management Response Force (CCMRF) explains who can turn this unit loose. “USARNORTH accomplishes its CBRN CM mission in strict adherence to public law and DOD policies. Deployment of USARNORTH, at the direction of the USARNORTH Commander and on the authority of the Secretary of Defense, occurs only after a Governor requests federal assistance from the President, and after the President issues a Presidential Disaster Declaration.”
In 2007, the Alaska/Northern Edge Training Mission was held as part of the first large-scale training for this internal military readiness force. Very little has been said to the general public about this whole affair. I'd wager most Americans aren't aware of this new strike force within our country. Are we closer to internal collapse than any of us realize? Why does the federal government feel the need for such a unit within our borders?
As It Stands, the idea that active duty soldiers will be used to control unruly civilian crowds is both terrifying and unconstitutional.
at November 12, 2012