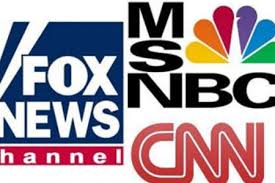 The following survey will probably come as no surprise to you. People have lost trust in the mass media.

The new “Lame Stream Media” makes no bones about supporting partisan causes. A flip of the dial and you have the Conservative excuse for reporting – FOX NEWS – or the Liberal excuse for news MSNBC – both party organs where the devoted can go to get sound bytes for ammunition.

All the credibility built up over years of news reporting from the likes of Edward R. Murrow to Walter Cronkite has been destroyed by greed. Yes, greed. Talking heads spewing party lines get more viewers than any attempt to just give the straight news.  A lot of Americans are fed up with the mass media for good reason.

“A new survey from Gallup suggests that six in ten Americans have little or no trust in the mass media to deliver the news "fully, accurately and fairly," a record number since the polling outfit began tracking the trend.

Here was the exact wording of the question: "In general, how much trust and confidence do you have in the mass media—such as newspapers, TV, and radio—when it comes to reporting the news fully, accurately and fairly—a great deal, a fair amount, not very much, or none at all?"

Sixty percent answered either "not very much" or "not at all," with the remaining 40 percent opting for either "a great deal" or at least "a fair amount." Just in case (or, we suppose, in the likely event) you don't believe us, here's the handy chart straight from Gallup:

According to the pollsters, this year's drop in media trust is being fueled largely by self-identified Republicans and independents.

Twenty-six percent of Republicans said they trusted the media either greatly or a fair amount, similar to the level of trust the GOP reported back in 2008, another election yea

r. Independents, meanwhile, are much more negative about the media than they were in 2008, something that Gallup says suggests "the group that is most closely divided between President Barack Obama and Republican Mitt Romney is quite dissatisfied with its ability to get fair and accurate news coverage of this election."