A country song about PTSD: 'All you've got left are these pieces' 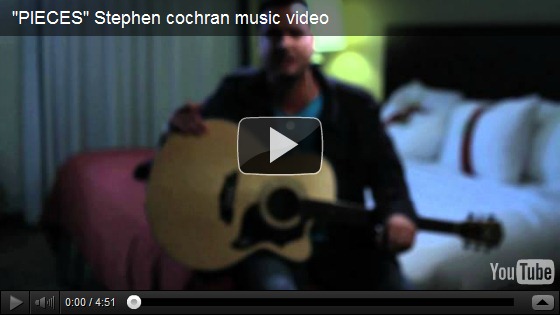 Even well publically raising awareness about PTSD for the VA, Stephen Cochran was losing his own battle with the condition.

As a combat veteran with PTSD, I really appreciate the efforts from fellow warriors like Stephen Cochran – who has been there, and done that.

His story is the new reality for thousands of veterans from Iraq and Afghanistan who returned home physically…but not mentally.

Please, take a moment and read Stephen’s story, and if you have time listen to his song “Pieces.”

“Everything you see in the music video happened to Marine-turned-country-singer Stephen Cochran: Pushing the girl away, boozing into oblivion, the gun on the blanket. It all went down last year. Even the actor who portrays Cochran is, himself, a former Marine and Iraq veteran who knows of post-traumatic stress, who has wrangled with identical demons. The actor was not acting.

The only on-screen tweak from reality was the type firearm shown. In his dimmest hour, behind a locked door in his Nashville home, exhausted, alone, and telling himself: “I’m done,” Cochran rested a loaded shotgun against his bed.

“I was just trying to get the nerve. I had it planned out,” Cochran told NBC News. “I didn’t know what was wrong with me. I was tired of taking all these pills. I was going through a breakup. Couldn’t write anymore. Watching everything fall apart. I was ready to check out.”

Then: salvation, and a surreal rescue scene worthy of an epic ballad. His dog, Semper Fi, began scratching relentlessly at his door, bloodying her paws. Next, Cochran’s ex-fiancé unexpectedly entered the house, simply to retrieve a forgotten item, he said. She saw the anxious dog. She expected the worst. She barged into the bedroom, spotted the gun and physically restrained Cochran.

But from anguish came inspiration. Amid an existence long blurred by PTSD — the residue of Afghanistan firefights, Marine buddies lost in combat, and his own nearly fatal injury — one question blazed in Cochran's head. He jotted it down: “How do you paint a picture back in focus?”

“It was the only way I could describe trying to put your life back together, literally trying to do the impossible,” he said.

Around that single thought, Cochran penned an entire song, “Pieces,”an ode to the blackness from which he was aching to escape, a tale of reconnecting the scattered fragments of his shattered world, and a message of solidarity for his military brothers and sisters. The single — part of a CD with the same title — will be released in this country on Nov. 11. The song already has charted in Europe.

“It’s not just my story. So many of us think about (suicide) because you just get so tired, so tired of being the crazy guy. Or of hearing: ‘He’s weird.’ Or of hearing: ‘We can’t hire you because we really don’t know what post-traumatic stress is and you might come back and kill us all.’

“I really wrote it as my own healing, for what I was going through,” added Cochran, 33, who teamed with fellow musician Trevor Rosen to complete the song. It took them only 15 minutes.

But after playing it at several veterans’ benefits, Cochran heard from service members up and down the chain of command how they, too, connected with the lyrics. That feedback has turned “Pieces” into the soundtrack of the singer’s ongoing crusade.

“We have an epidemic of suicides in the military right now. At this point, we are physically losing both of these wars in the United States of America, not overseas.” (source)

Related: First opera about Iraq War reaches out to veteran suffering from PTSD