Why not? Marijuana is going to the dogs and I say right on! 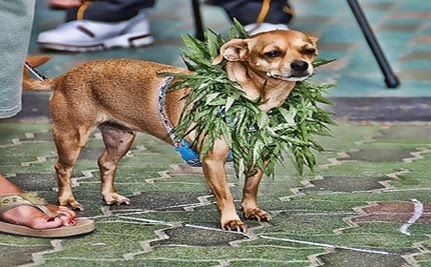 Why am I not surprised?

Marijuana for Mutts, Cannabis for Canines, Dank for Dogs, and medical pot Patches for Pups.

Have you ever seen an illegal class one drug (which the mutants in the Justice Department insist on ranking marijuana) go so mainstream that even the animals are doing it?

“In February 2011, a company called Medical Marijuana Delivery Systems, LLC (MMDS) acquired the rights to a patent for a transcutaneous (through the skin) delivery of medical marijuana to humans and animals. The MMDS goal is for public availability of this patch by year end.  Given the trade name Tetracan, this skin patch delivery system could be called a pot patch for pups, canine cannabis or even medical marijuana for mutts.

Animals suffer from many of the same debilitating illnesses that humans do, like arthritis and cancer.  With many U.S. states legalizing the use of medical marijuana for humans, it doesn’t seem like such a stretch to apply this concept to animals.

In 2000, a Santa Ana Pueblo tribe member in New Mexico, Walter Cristobel, experimented with finding a transcutaneous delivery system of marijuana for his mother’s pain relief and was awarded a patent.  In 2010, businessmen Jim Alekson and Chester Soliz — learning of Cristobel’s patent — joined him in forming MMDS, “a company devoted to the advancement, research and development of marijuana delivery modalities.”

“MMDS is pleased to be working with Walter Cristobal to help him develop his innovative ideas as MMDS advances the research and development of TETRACAN holistic, therapeutic products,” stated Jim Alekson, ADG Market Focus spokesperson for MMDS in a press release.  Other delivery systems such as creams, gels and oils will be explored for other ways of delivering medical marijuana.

Alekson informs me he has been working on a stock exchange listing for MMDS that is expected to take place shortly.  With that and the new bio-chemists with trans-dermal expertise coming on board, the arranging of manufacturing contracts in medical marijuana-legal states should see the Tetracan patch available by second quarter, 2012.”            story source  --    Photo credit: Chris Yarzab via flickr