Tuesday thoughts about sugar and other stuff… 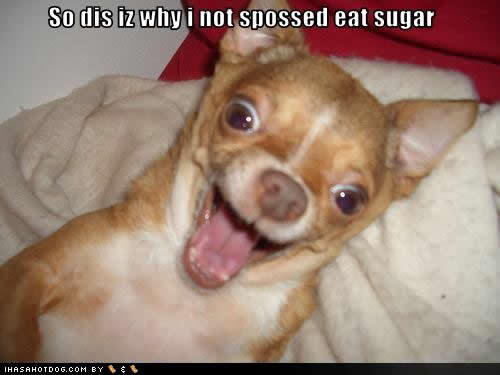 Good to see you here this morning. Pull up a chair, grab a cup of your favorite hot beverage, and let’s see what’s happening today:

Sugar may be sapping your memory

Do you ever forget people's names? Enter a room and forget why you went there? Forget a word mid-sentence? As we get older, these types of "senior moments" happen more often. Many of the people I evaluate worry that these slips mean they are getting Alzheimer's disease. In most cases, they aren't. They're just part of normal, age-related memory decline. Starting at about age 30, our ability to process and remember information declines with age.

Nathan Parks created the 99 cent "Kick to Pick" iPhone app for parents undergoing that conundrum of being responsible for that ultimate act of choosing a name for their child, placing the choice in the hands — and kicking feet — of the unborn child.

Food prices could double in the next 20 years and demand in 2050 will be 70 percent higher than now, U.K. charity Oxfam said on Tuesday, warning of worsening hunger as the global food economy stumbles close to breakdown.

Things have gone from bad to worse since President Mubarak was ousted. I can tell you one thing, I wouldn’t want to be a woman in that part of the world! They’re treated like cattle with less rights.

A senior Egyptian general told CNN Tuesday that officials performed "virginity checks" on women arrested during the uprising that led to former President Hosni Mubarak's ouster, the first time the authorities have admitted they performed such tests during the revolution.
The tests were first reported by the human rights group Amnesty International, weeks after a March 9 protest in Cairo's Tahrir Square in which female demonstrators were allegedly beaten, strip-searched, threatened with prostitution charges and forced to submit to procedures that supposedly determined whether they were virgins.

'Weinergate': The 'strange' scandal of a congressman and a lewd Twitter photo

Finally this morning, I’ve saved the best for last. This weekend, Rep. Anthony Weiner's Twitter account sent out a photo of a man in underwear from the waist down. Weiner says his account was hacked. What's going on here?

A "lewd" photograph of a man in underwear, shot from the waist down, was sent from the Twitter account of Rep. Anthony Weiner (D-N.Y.) on Friday night, then quickly deleted — but not before Andrew Breitbart's Big Government website posted the photo. Weiner says his Twitter account was hacked, and has hired a lawyer to explore criminal or civil action against the perpetrators of the "prank." Conservative bloggers claim Weiner sent the photo to a Washington State college student, dubbing the "strange" saga "Weinergate."

That’s it for this morning. Time for me to walk on down the road…