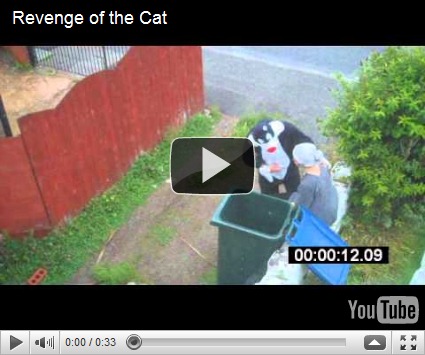 The Internet abhors a cat dumper.

Never was that sentiment more clear than in its ongoing outrage over the infamous "Cat Bin Lady" of Britain, who made international news after video captured her petting an unsuspecting cat, then incongruously dropping the friendly tabby in a nearby garbage bin.

Gawker's Adrian Chen, himself a victim of the /b/board Internet horde, reports on 4chan's rapid identification and dissemination of the woman's identity, including her name and contact information, as well as that of her employer. Fitting, considering 4chan is responsible for the LOLCat phenomenon enjoyed by the general Internet population today. As was the case when 4chan targeted adolescent viral video star Jessi Slaughter,