The Riddle of the Rats: Discovered: The Biggest Rat That Ever Lived – or Is It?

Researchers announced today that they have unearthed the remains of the biggest rat that ever lived on this planet.

“The skeletal remains of the robust rodent were found in a cave. The excavations also turned up 13 other species of rodents, 11 of which are new to science, with eight of the rats estimated to have weighed more than 2 pounds (1 kg

When alive, the giant of the bunch weighed some 13.2 pounds (6 kilograms). For comparison, a house rat weighs on average 5 ounces (150 grams). Today's heftiest rats weigh around 4.4 pounds (2 kg) and live in rain forests in the Philippines and New Guinea.” 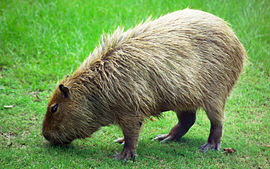 There’s at least one little detail (forgive the pun) that bothers me.

What about the Capybara (photo right)? I read where it’s the largest living rodent (rat?) today, and that the Capybara measures from 40 to 55 inches long, and the males can weigh up to 135 pounds!

That seems a whole lot bigger than what these, puny by comparison, rodent/rat ancestors who barely tipped the scales in comparison. So what’s the big deal? Are the researchers unaware of the prodigious Capybara? Not likely. Do they consider it something other than a rat? Hmmmm…The Capybara is a rodent. When is a rodent not a rat? None of this makes sense to me.

It gets even more confusing. Read about another rodent with the claim of being the biggest that ever lived. The Josephoartigasia monesi weighed a ton or two, according to scientists, and was bigger than a bull! This guy was a relative to the Capybara:

I’d like to know the REST OF THE STORY (forgive me Paul Harvey). Rodents and rats are same same right? I’m not sure now…Here’s a shout out to anyone who can solve the riddle of the rats for me.