Don’t you just love politicians who will do or say anything to cater to extreme conservative wingnuts who vote?

Republican Sen. David Vitter of Louisiana says he supports conservative organizations challenging President Barack Obama's citizenship in court. His spokesman did not immediately respond to a question about whether the senator doubts Obama's citizenship

This announcement is designed to get the Tea Baggers attention, along with other clusters of dissatisfied rich white people who resent an African American/Caucasian president. You know the ones I’m talking about. They want to turn the clock back to 1954 – to the “good old days.” These conservative pillars in our nation want their country back.

Now Vitter is the kind of guy who the wackaloons respect. I’m mean, he’s got a track record. Let’s see. How about some of his exploits:

Louisiana senator David Vitters was the big story at the beginning of this week. First, his name came out on the DC Madam's list. Then, a pair of New Orleans brothels maintained he visited them with some frequency.

And, Wonkette reported that Vitters's particular fetish was diaper wearing. 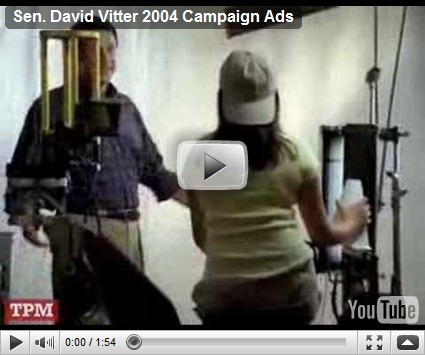 All this was especially laughable due to its hypocrisy, what with Vitters being one of those Republicans that got into office on the family values, God-gays-guns platform.

Vitter has, once again demonstrating what a sleasy kinda guy he is by sucking up to racists conspirators. The Birthers are as about as credible as the KKK or the Ayran Nation Network. Come to think of it, he may attract a wide following of crazed white conservative supremists, but I don’t think they have the numbers to make that much of an impact. You never know though. This country is getting scary.