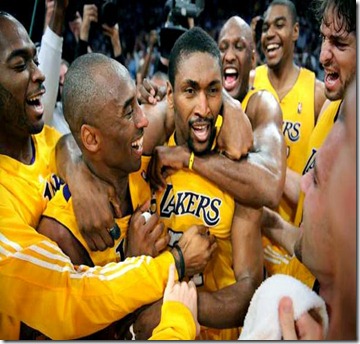 Regular readers of this blog know that I’m a Laker fan (have been since they moved to LA and played at the old Sports Arena).

The Laker’s trip to the finals has been fascinating, frustrating, and it’s still not over. They have to beat the Sun’s in Phoenix. If they don’t, the seventh game will be at Staples Arena where the Lakers are unbeaten in the series.

Ron Artest pulled the Laker’s out of the fire at the last possible moment.

The forward's follow of Kobe Bryant's miss gives the Lakers a 103-101 victory over the Suns and puts them one victory from the NBA Finals.

Posted by ImBlogCrazy at 9:11 AM