When the Army Uses "Enhanced Interrogation" on an American Soldier 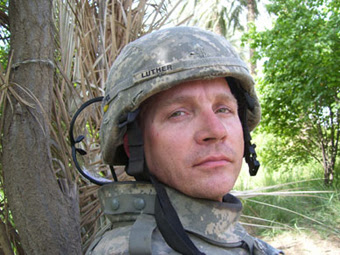 By Joshua Kors/ Investigative Reporter for The Nation

“I had been covering veterans' issues for several years and thought I'd developed a thick skin.But the pain on the other end of the telephone line was difficult to stomach.

Sergeant Chuck Luther, now back from Iraq, was describing his journey to hell and back. The worst part, he said, wasn't battling insurgents or even the mortar blast that tossed him to the ground and slammed his head against the concrete — it was the way he was treated by the U.S. Army when he went to the aid station and sought medical help.

In gruesome detail, Luther described what happened to him at Camp Taji's aid station. He thought he would receive medical care. Instead he was confined to an isolation chamber and held there for over a month, under enforced sleep deprivation, until he agreed to sign papers saying that he was ill before coming to Iraq and thus not eligible for disability and medical benefits. "They wanted me to say I had a 'personality disorder,'" Luther told me.”

Go here to read the rest of this article.

Posted by ImBlogCrazy at 4:47 PM