'The Grand Life' and 'As It Stand's' team up today 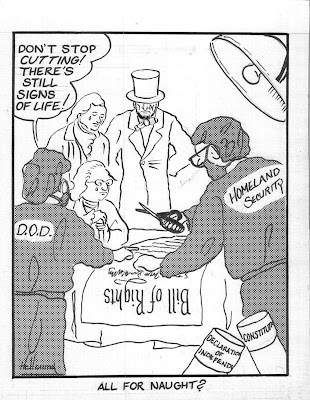 From the Saturday, June 20, 2009 post titled:
Orwell would have shook his head and said: I told you so!

So far everyone who has seen this toon asks. "Why Lincoln?".

Jefferson and Franklin and many others wrote these priceless documents. Lincoln, for all intents and purposes, stood alone in his attempt to defend and maintain their place as guides for our government, as well as maintain the nation as a whole, as the Founding Fathers intended.

Seems a shame to let certain departments in the very same government, screw with it!

Cartoon and text via Holloway's The Grand Life