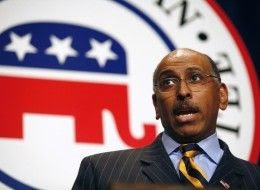 This interesting news from The Hill web site is going to provide the "talking heads" from both parties with plenty of ammo. Watching the GOP Party thrash around trying to find a new identity is almost painful to see. Who will emerge from this chaos carrying the Republican flag to victory in the next election? My guess is Rush Limbaugh after recent events exposed the GOPs slavish following of an entertainer-who just happens to be an conservative extremist who wants the country to fail unless his buddies get their way about whose going to run things. Steele probably isn't wacky enough for the confused elephant-worshippers. Stay tuned...

Michael Steele should resign as Republican National Committee (RNC) chairman, according to a committee member from North Carolina.
In an e-mail to fellow RNC members obtained by The Hill, Dr. Ada Fisher, North Carolina's national committeewoman, said Steele is "eroding confidence" in the GOP and that members of his transition team should encourage him to step aside. Fisher added Steele's personal e-mail address to the e-mail."I don't want to hear anymore [sic] language trying to be cool about the bling in the stimulus package or appealing to D.L. Hughley and blacks in a way that isn't going to win us any votes and makes us frankly appear to many blacks as quite foolish," Fisher wrote.