He's Back! Blago signs six-figure book deal to 'expose the dark side of politics' 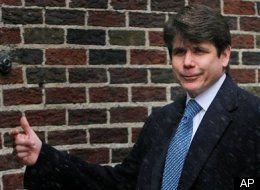 FROM TALKING POINT MEMO, VIA THE ASSOCIATED PRESS, DISGRACED EX-GOVERNOR ROD BLAGOJEVICH REBOUNDS AND WRITES A BOOK ON (OF ALL THINGS) THE DARK SIDE OF POLITICS! WHEN IT COMES TO PURE GALL BLAGO TAKES THE CAKE.

"Rod Blagojevich, the first U.S. governor in more than 20 years to be removed from office by impeachment, signed a deal Monday to write a book "exposing the dark side of politics," his publicist said.

Blagojevich signed a "six-figure" deal to write a book for Phoenix Books, to be released in October, publicist Glenn Selig said in a news release.

Selig said the former governor "plans on exposing the dark side of politics that he witnessed in both the state and national level."