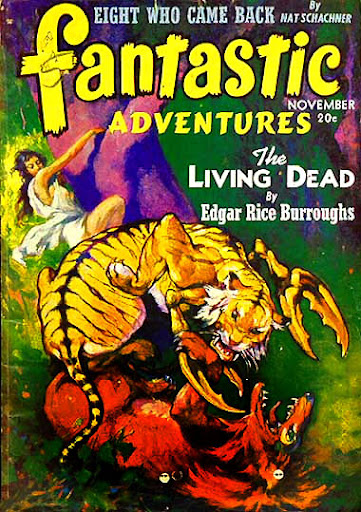 Edgar Rice Burroughs
"The Living Dead"
(Carson of Venus series)
© Fantastic Adventures, Nov 1941
Escape on Venus, 1946 (below)
-This book is a rare find. If you have it, then you should hold on to it.

This book is part of the last Burroughs series: "Carson Napier on Venus".

"It reminded me of Alan Burt Akers "Scorpio" series, with the strange flying machines, fantasy-like aliens and clockwork primitive plot. Of course, Akers (pen name of Kenneth Bulmer) imitated Burroughs, but... Akers did it more engagingly, me thinks. Here, formulaic adventure is not as exotic and lush, as one might expect from Burroughs - however, it does contain one of the future staples of space opera: putting our heroes on display (hanging from a hook) in an alien museum, and their subsequent inevitable escape.
It seems the movie is in the works based on "Pirates of Venus" series. Should be a colorful CG experience. By the way, I was pleasantly surprised to learn that there is a term "Sword and Planet" used to describe the whole sub-genre in science fiction. Very convenient; I am going to use it now on a ton of pulp and paperback fiction reviews (Robert Moore Williams, Lin Carter, Akers, etc.) " 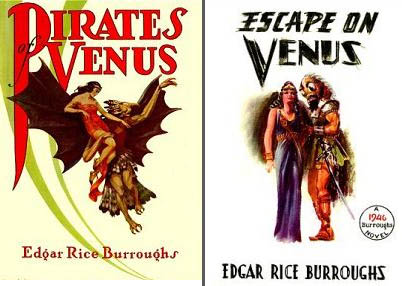 images and write-up via darkroastedblend.com