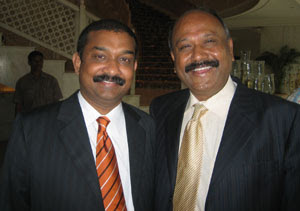 A leading Indian outsourcing company, Satyam Computer Services, has been cooking-the-books for years now according to it's chairman and co-founder, Ramalinga Raju, who confessed how he did it. This news rocked India's stock market and the benchmark Sensex index fell more than 5 percent. Shares in Satyam fell more than 70 percent.

Observers are already comparing this huge scandal with America's Enron debacle. With America's recent outsourcing popularity on the rise, this could just be the tip of an iceberg that reverses the trend. The idea of having a "backdoor business" has been growing in popularity here, and getting work done for less money has fueled the trend. But what about quality?

I've had a problem with this outsourcing trend since I've researched it in recent years. For starters, we have been shipping jobs to India and letting Americans get laid off, like in the newspaper industry, in the name of profit. Patriotism be damned. In a time where we are facing staggering unemployment figures that threaten our economy, we are currently outsourcing jobs. It just doesn't seem right.

Several states reported employment computers were crashing from the massive inquirers this morning. While the mainstream media is reporting those shocking numbers of Americans standing in unemployment lines, there's very little being said about jobs leaving the country. That has to be factored in. To pour some salt on that wound, we are also bringing in foreign workers, like teachers, to fill job positions in our public schools, and other white-collar jobs.

You can't tell me this is good for the American economy. It's good for those select businesses that save money however. It's certainly not good for those long-time employees who were making good wages and were the first to get let go and replaced by cheap labor.

AS IT STANDS, India's outsourcing industry problems are now entwined with ours, and the future is unclear.

Click here to read more about the Satyam scandal.