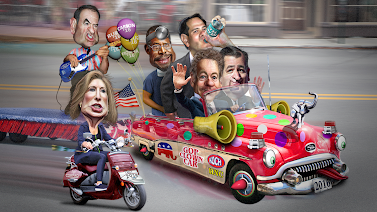 Listen my children and you'll shall hear

to debunk science and facts

As the rest of the world responds to the new COVID-19 variant, Omicron, Republicans are scrambling to blame Democrats for the arrival of the new mutation.

Clown Caucus House GOP members are claiming the Democrats invented Omicron. That's right. As stupid as this claim is, it'll be raw meat for Trump supporters and other low life extremists.

Fox is having fun mocking the new variant. It's really something to see the Good Morning Moron Crew casually joke about a new mutation of the deadly virus.

One Congressional wag (who isn't worth naming) commented that the Democrats came up with Omicron virus to help them out in the midterms. Like a deadly virus would be a selling point? Unbelievable.

As Axios reported Monday morning, the concerted efforts to keep shots from going in arms have escalated in red states, with Republican politicians now openly bribing constituents not to get vaccinated.

"Florida, Iowa, Kansas and Tennessee have changed their unemployment insurance rules to allow workers who are fired or quit over vaccine mandates to receive benefits," Axios stated in the report.

I can't help wondering how many Republicans/Trump minions are going to die to show their loyalty to the most corrupt president this country has ever seen?