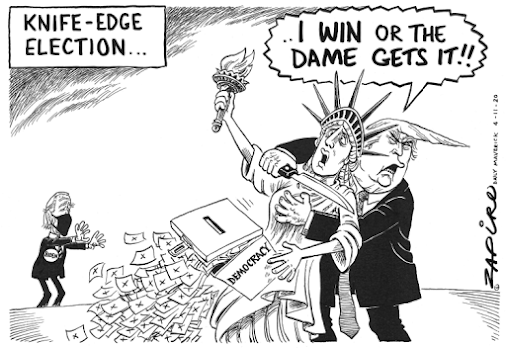 The evidence grows every day.

The facts are clear. Trump's coup attempt came closer than most Americans realize, and the challenge to democracy still exists.

As we learn more and more about the extremes that Trump minions were willing to go in an attempt to overturn the election, one thing is crystal clear:

Trump committed sedition. He tried to destroy our republic and is still actively pursuing his vendetta against free and fair elections.

The latest example of Trump's perfidy is just one more revelation of how close we all came to losing our freedoms.

Jeffrey Clark, a top official at the Justice Department composed a draft letter where he urged acting Attorney General Jeffrey Rosen and acting deputy Attorney General Richard Donoghue to sign onto a bogus claim that there was "significant concerns that impacted the outcome of the election in multiple states."

It was a bullshit attempt to invoke havoc and luckily for us all, it didn't succeed. Rosen and Donoghue refused to betray their country.

In the end the letter was never sent and Clark was blasted for his seditious attempt.

For the record: Clark was acting with blessings from Trump. It was a coup attempt with the full knowledge of Trump. Of that, there is no doubt.

Reams of evidence keep turning up as we hear recordings of Trump threatening state officials not to certify the 2020 election.

There's several investigations going on in Congress to address Trump's attempts to steal the election. Several states have filed lawsuits against Trump and his minions for their unlawful attempt to take over the country.

What I don't understand is why hasn't Trump been charged with sedition by now? The evidence that's already been revealed should be more than enough to indict him for treason.

There's an old saying that the wheels of justice move slowly. In this case eight months have passed since the insurrection and Trump still hasn't been charged.

A dozen of Trump's cronies have been sent to jail since he lost the election. Other MAGA followers are pushing lies, even as they're being called out for treasonous activities.

The Jan. 6 House Select Committee is crawling along and still hasn't named who they're going to question.

Investigations revealing Trump's attempts to overthrow the will of voters in Georgia and Arizona, are also creeping along.

What the hell are we waiting for? The time for justice is long overdue. We can't afford to let him lead another assault upon American institutions.