Another Fraud Lawsuit Advances Against Trump and His Children 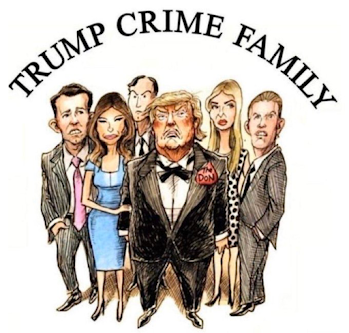 Remember when the Trump crime family's charity organization was dissolved after ripping off veterans, other organizations, and individual donors?

Trump was forced to pay $2 million in court-ordered damages to eight different charities for illegally misusing charitable funds at the Trump Foundation in 2019.

America's premier crime family is back in court for another fraud lawsuit promoting a marketing scam targeting the poor and working class.

A federal appeals court said today Trump and his adult children cannot move into arbitration a fraud lawsuit accusing them of exploiting their family name to promote a marketing scam.

Four plaintiffs in the proposed class action accused Trump, his children Donald Jr., Eric and Ivanka, and an affiliate of the Trump Organization of promoting American Communications Network in exchange for millions of dollars in secret payments from 2005 to 2015.

The plaintiffs said Trump's endorsement, including on episodes of his TV show "The Celebrity Apprentice," conned them into thinking their investments would pay off.

By now the Trump crime family's modus operandi is common knowledge. They're cheaters, liars, and lowlifes feeding off the American public.

For years Trump has been able to fend off the increasing lawsuits by burying them in the courts until they wither away.

That tactic is no longer working.

He's run out of appeals in several civil lawsuits that are going to end up in court now.

His presidential protections and immunity are no longer allowing him to put off court cases. A good example is the case filed in Manhattan against the Trump Organization. It's moving forward rapidly and may go to court this year.

I'm still amazed at how long Trump has avoided going to jail for his numerous crimes throughout his career.

Despite his Mafia connections, and his dealings with Russian Oligarchs in real estate, he's been a "Teflon Don" out of the reach of justice.

The long awaited reckoning for Trump is coming from all directions. It's time to sit back and watch the hammer fall...repeatedly.