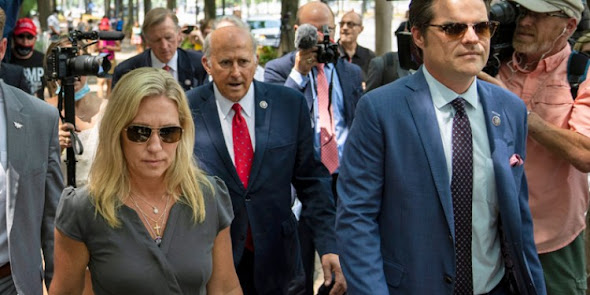 Save the Prisoners! Matt Gaetz (front right) and Marjorie Taylor Greene (front left) are followed by their crazy comrades Louis Gohmert (behind Greene) and bringing up the rear (behind Gohmert) is Paul Gosar.

After calling the Jan. 6 rioters "tourists" and "patriots," House Republicans have shifted to a new strategy... canonize the rioters who are still behind bars for attempting to overthrow the government.

Suddenly those wackos who attacked Capitol police are being called "political prisoners" by four of the craziest Republicans in the House.

The group, consisting of Louis Gohmert, Matt Gaetz, Paul Gosar, and Margie Taylor Greene, attempted to visit some of the prisoners in a detention facility in Washington D.C. on Thursday.

Their attempt was rejected and they were accused of trespassing. But it made great theatre for right-wing lunatics on cable TV and social media.

Their pathetic attempt to divert from the Jan. 6 Select Committee's mission would be laughable if it wasn't so treasonous.

One America News Network (where truth goes to die) and the Rightside Broadcasting Network which hosts a right-wing YouTube channel, followed the little group around like their actions were breaking news.

It was. In an alternative world where one Big Lie has already infested the Republican party.

So, this latest attempt to create a new Big Lie by House Republicans is falling on deaf ears. The majority of Americans aren't comparing the insurrectionists to political saints... yet. At least sane Americans aren't.

To date, The Justice Department has reported arresting 535 people in connection to the insurrection.

As these prisoners move through the judicial process they're going to be charged with crimes despite GOP propaganda suggesting they're all being wronged and tortured.

With Trump leading Republicans around by the trunk nose the lies will continue to pile on - shiny objects spinning around in Trump World as the rest of us ignore their antics.