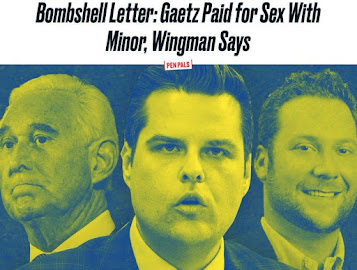 When Rep. Matt Gaetz stumbled into his bathroom upon waking up, the news that his pal Joel Greenberg had made a deal with investigators shocked him.

Trembling with fear he slapped his face makeup on haphazardly as he thought about the 17-year-old girl he was accused of having sex with cooperating with investigators.

In a moment of panic he smeared his lipstick across his face, looking like The Joker in Batman adventures.

Mirrors don't lie. The reflection that came back to him was that of a ruined man expecting the ax to drop.

He knew at that moment Greenberg was singing like a canary and his chances of being indicted had tripled.

He dreaded Monday when Greenberg will plead guilty before a federal magistrate in court.

It's not entirely clear what charges he'll plead guilty to, or whether prosecutors might substitute other charges as part of his plea deal.

What was clear to Gaetz as he stared into the mirror, was his buddy had made a deal that was going to cause him grief.

After running around for years in Washington D.C. like a frat boy on vacation, he was being humbled and hunted, as prosecutors were preparing charges against him with Greenberg's help.

Turning away from the mirror all he could think about was getting a lawyer, and Roger Stone's help in beating the case.