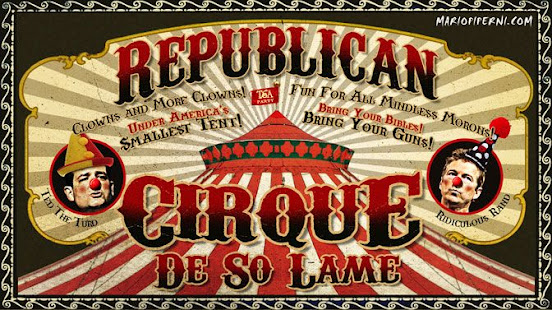 When was the last time you heard Trump or any of his minions push actual policies as opposed to rewarding personalities with no brains or ethics?

To be a GOP star includes having an abrasive personality, the ability to glibly lie, and a knack for putting on a circus every time they're near a media source.

I had to laugh when Republicans got together earlier this week to plot the way forward as a party. Words like policy were batted around like badminton birdies.

Afterwards the closest the members could come to was a future plan to continue to demonizing the democrats as socialists.

Republican voters have been spoiled with the biggest circus performer in the land, former president Trump.

The idea of putting on a good show was very attractive, especially to former Apprentice fans of Trump.

Following in his footsteps, actors and con men became popular as politicians. Most with no experience, but all ready to perpetrate the BIG LIE.

This extreme strategy failed in the 2020 elections, but Republicans are loath to giving it up because they fear Trump and his rabid base.

Some Republicans know that personality is not as important as making policies. Third-ranked House GOP leader Liz Cheney has said as much in their recent planning session.

Not that it matters.

The goal for GOP lawmakers is to raise money through extremist members like Devin Nunes - a political hack and traitor (see Ukraine scandal).

As long as people like Marjorie Taylor Greene, Lauren Boebert, Jim Jordan, and Josh Hawley are pulling in sizable donations they'll continue to be stars for the party.

Republicans abdicated policies when Trump was elected, choosing to be entertained by a clown con man who is a serial liar.

Until Republicans are able to sever their toxic relationship with Trump cult followers, they're going to be held hostage by a sea of lies.