Regeneration: What Do Trumplicans and Two Species of Sea Slugs Have in Common? 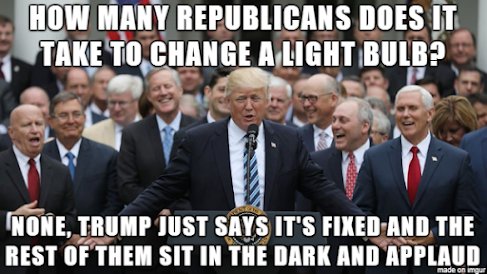 Researchers recently discovered that two species of sea slugs can regrow hearts and whole bodies, even after removing their own heads!

That information made me immediately think of the Republican Trumplican Party. The similarities are obvious.

Apparently these two special species of sea slugs cut off the own heads (for reasons still not known) and the separated head grows a new body.

When Trump was voted out of office he was decapitated as the party head. The GOP was thrown into chaos.

What emerged is Trump's attempt to grow a body back and regain his once unlimited power. Holed up like a hermit crab in Florida, he's busy plotting a new attack on our republic.

Meanwhile the severed body politic, divided between Republicans and Trumplicans, has been thrashing around in search of a direction.

Elements have already joined with Trump in an effort to regenerate his political body. Time will tell whether he'll continue to be a threat to democracy.