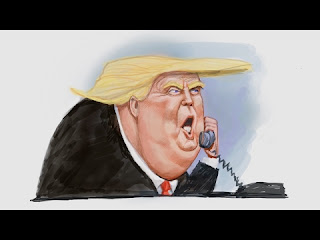 Now there's two states that are investigating Trump for criminal offenses.
Remember Trump's first "perfect call" last year when he tried to extort the Ukrainian president to dig up dirt on Joe Biden?
It looks like Trump didn't learn his lesson the first time (thanks to a Senate that was populated by jellyfish).

Georgia joins New York in filing a criminal investigation into Trump's activities - in this case a phone call that was far from "perfect."

The investigation by Fulton County prosecutors is looking into a damning phone call that Trump made to the Georgia Secretary of State, Brad Raffensperger, while he was still president in which Trump begged him to "find" the votes to reverse Joe Biden's victory.

According to The New York Times there are several allegations ranging from false statements to "any involvement in violence or threats related to the election's administration."

In addition, Raffensperger's office has opened a separate investigation into the phone call.

This is going to be a bigger story than Trump's second impeachment.

More importantly, he may actually be convicted, unlike the impeachment trial with it's predetermined outcome.