A Couple of Thoughts About Dealing With Reality 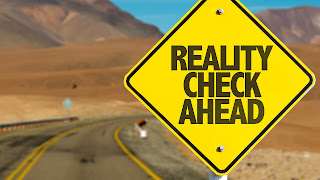 Reality has always been a problem for people.

That's where daydreams came in.

Humans physically stuck in harsh environments needed an outlet from their misery. Thinking about being somewhere else more pleasant gave them something to hope and dream for.

But what happens when people can no longer tell the difference between what's real and what's imaginary?

That question is just one of the many dilemmas Americans are facing this year.

Trump and his supporters have challenged every aspect of the election that Joe Biden won with ridiculous court cases that have been thrown out with scorn. The score is: Courts 56 - and Trump 0

Be that as it may, Republicans are defying the reality of the election and court losses to curry future favors. GOP pols are looking the other way as Trump tries to overturn the election results.

We have a constitution and it held up. This time. Barely.

Millions of Trump's followers have suspended reality, like it was negotiable, and have entered into Trump's world. A world where believers don't wear face masks because Trump doesn't, despite what healthcare professionals advise.

Like Jim Jones followers, Trump followers are willing to die from COVID-19 if he asks them to.

It's difficult to understand how intelligent human beings can get so carried away with an alternate reality that they lose touch with the real world around them.

Daydreams are one thing.

Massive delusions are quite another.