Today's Subject: Where Should a Trump Library Be Located? 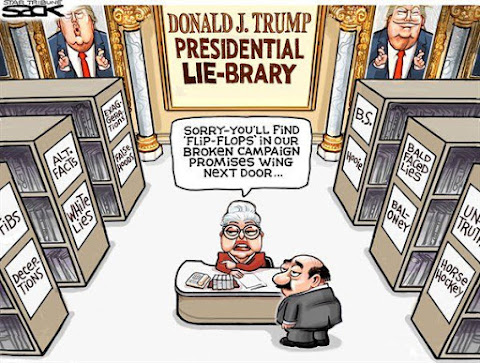 Yesterday he asked his numerous Twitter followers, "Where should the Trump Library be located?

Here's a collection of responses that are hilarious:

--On the Mexican side of the wall."

--"There are several options here:

1) Moscow (They already have all his important personal papers, so it would save time.) 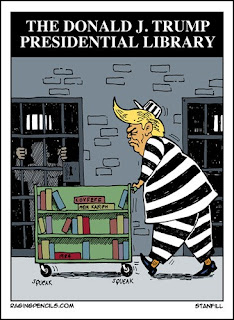 3) Inside an abandoned coal mine in West Virginia

--"Obviously, it belongs at the site of the Bowling Green Massacre."

I have a few suggestions for a Trump Library location:

--Why have it located in just one place when there could be a traveling display?

Like a Three-Ring Circus featuring clowns from his administration; interactive displays of bronzer makeup application; the Sharpie pen and map that the weather service was forced to show how Alabama was in the way of a hurricane - when it wasn't; and countless other artifacts that will disgust and entertain future generations.

--In the center of the Florida Everglades. Since Trump made the state his new residence after fleeing New York prosecutors, it's appropriate that his (bookless) Library be located in a swamp.

Quote for the Day; "This life's hard, but it's harder if your stupid." -George V. Higgins