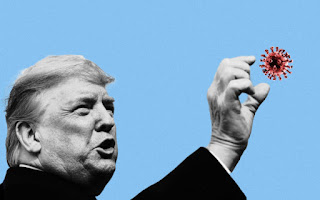 History will show how Trump's profound ignorance of science and his denial of a deadly virus killed thousands of Americans.

I think it's important to document other professional science deniers who refuse to wear masks and take all the safety recommendations by healthcare professionals. Their contribution to the chaos during the pandemic can not be underestimated.

I'll start off with the most recent example of science deniers putting others at risk. August 10th:

Straight from the infected state of Florida, where record numbers of people are dying daily from COVID-19, we have Marion County Sheriff Billy Woods.

Billy boy ordered his deputies NOT to WEAR MASKS despite 542,000 cases of the novel coronavirus and 8,600 deaths in the state. It's hard to believe, but true. He told reporters he could debate and argue all day why, and why not, to wear masks.

He went so far as to falsely claim there's as many healthcare experts that believe masks are unnecessary, as one's who say they ARE necessary. That's pure bullshit on a steaming platter of ignorance.

The bad doctor's rousing speech in support of sending children off into a COVID-19 petri dish, was in support of Trump's lies about how safe it is to go back to in-person school this fall.

Parents, teachers, and healthcare experts disagree. We're already seeing the ill effects of going back to school too early in New Jersey and Georgia.

Not So Long Ago
In February, a little more than a quarter of U.S. adults believed the coronavirus was being blown out of proportion. (That number has actually risen and now 40 percent believe the virus is a big to-do over nothing.)

March 9 - Sean Hannity on the Coronavirus: "I think we've got to be very real with the American people. I don't like how we are scaring people. Unnecessarily. And that is that unless you have an immune system that's compromised and you are older and you have other underlying health issues, you are NOT going to DIE, 99 percent, from the virus."

March 16th - Ron Paul claims the coronavirus could be a "Big Hoax" and a way to take rights away.

"It is ironic to see the same Democrats who tried to impeach Trump last month for abuse of power demanding that the administration grab more power and authority in the name of fighting a virus that thus far has killed less than 100 Americans," Paul wrote on his website.

April 28th - Cheryl K. Chumley, reporter for The Washington Times: "The response to the coronavirus is hyped. And in time, this hype will be revealed. In fact, COVID-19 will go down as one of the political world's biggest, most shamefully overblown, overhyped, overly and irrationally inflated and outright deceptively flawed responses to a health matter in American history, one that was carried largely on the lips of medical professionals who have no business running a national economy or government."
(Apparently the writer knows nothing about run-on sentences, but then look at the publication.)

May 27th -  "As the United States neared 100,000 deaths from COVID-19, a majority of Republicans still don't grasp the basic fact about the disease: it is considerably more deadly than the flu." The New York Times

July 13th - Game Show host Chuck Woolery claimed "everyone was lying" about the coronavirus as a part of a plot to sabotage the economy and hurt Trump's reelection campaign. Of course, Trump re-tweeted the blatant lie.

Just yesterday, a Tennessee trooper (no mask on) ripped a face covering off a witness to a traffic stop in a caught-on-video confrontation that could lead to a lawsuit, according to the local newspaper the Daily News.

Sadly, I could go on with endless other profiles in ignorance under one of the stupidest presidents in this nation's history.

Quote for the Day: "Nothing in the world is more dangerous than sincere and conscientious stupidity." -Martin Luther King Jr.
at August 13, 2020