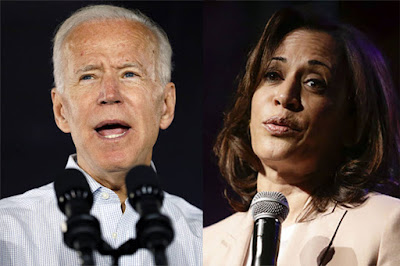 Well, Joe pulled the trigger yesterday and announced he was picking Sen. Kamala Harris as his running mate.

I remember talking with my wife, Shirley, when names starting surfacing for prospective VP candidates, about Harris. I'm not claiming we were psychics, but we both made a snap decision that Harris should be the pick.

As the months crawled by during this dreadful pandemic everyone was speculating about who Joe would pick. One candidate's name after another surfaced in the press and then faded away.

Kamala Harris' Credentials
**She is the only Black woman in the U.S. Senate (elected in 2016).

**She served as California's Attorney General, and before that as a San Francisco District Attorney.

Background and Education
**She is a native of Oakland, California, and the child of Jamaican and Indian immigrants.

**She attended Howard University for her undergraduate degree and was a Capitol Hill intern in the very same office she occupies today.

**She wrote a book, "The Truths We Hold: An American Journey."

**When Harris was still running for president she attacked Biden during the Democrat debates for his record on busing and working with segregationists.

The attack was unexpected and left Biden bruised, especially because she was such a close family friend with Beau. Biden's wife Jill said the attack felt "like a punch in the gut."

Despite that, the two patched things up and Harris gave her full support to Biden after he won the nomination. In June, she raised $3,5 million for his campaign.

After carefully following the progress of all the VP candidates, I'm really comfortable with Joe's pick. I fully expect Trump and minions to start braying like jackasses today about her selection.