Pandemic Diary Day 146: Trump Signs Executive Order: Americans Have To Vote For Him 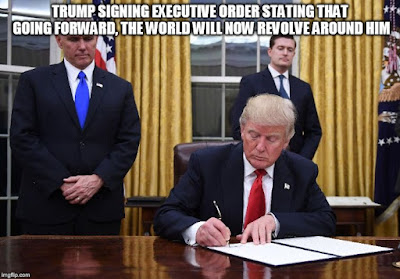 Trump decided a long time ago that executive orders were like waving a magic wand. He could sign one to get anything he wanted.

In the real world, many of Trump's executive orders have been, and still are being, challenged in the courts.

Fact: The Constitution gives Congress authority over federal spending, so Trump does not have the legal authority to issue executive orders determining how money should be spent on fighting the coronavirus.

That hasn't slowed Stump down in the past when he declared a national emergency on the U.S.-Mexico border to shift billions of dollars from the defense budget to pay for his wall that he promised his supporters in 2016.

Congress passed legislation to stop him, but there were too few votes in the Republican-controlled senate to override his veto.

If the measures that he signed yesterday are challenged by Congress - and it's likely they will be - a similar scenario could play out two months before the general election. Meanwhile all the measures are in limbo. Then it becomes a political football.

To be clear, they weren't bills, despite what our liar-in-chief claimed yesterday.
There were four measures:

The first measure established a payroll tax holiday through the end of the year for Americans earning less than $100,000 a year.

The second defers student loan payments until the end of the year.
Nice, but not exactly the immediate relief people need.

The fourth measure extends unemployment benefits that ran out last week, but at a reduced level of $400 instead of $600.

While both are important, without a comprehensive stimulus relief program conditions will only get worse than they are now. Not too mention it would be stripping Congress of its powers.

Picking and choosing segments of society to temporally help when practically everyone needs help is a vile political move by a malicious narcissist.

Once again Trump held a rally (falsely claiming it was a press briefing again) at his Bedminster Golf Club and invited his uber-wealthy pals (who pay upwards of $250,000 a year in  membership fees to be entertained by the reality TV president) to witness the "historic event."

It was weird watching a group of millionaires without masks clapping their hands like seals every time Trump lied about everything from the perils of mail-in voting to Joe Biden being a senile puppet of the extreme left.

Needless to say, it wasn't a pretty picture.

The optics of out-of-work Americans waiting in food lines and hoping for government help, while Trump paraded around in his club house like an obese peacock campaigning for re-election is going to resonate with millions of non-millionaires in the weeks ahead.

**Americans have to vote for Donald Trump or be declared traitors.

**LED light bulbs and water saving toilets will be banned in the U.S.

**Anyone who sells Trump memorabilia (to include street vendors) will be eligible for coronavirus grants from $1 million and up.

**A declaration of a new national holiday honoring White Supremacist's in America, on June 17th.

**Trump properties are no longer subject to any kind of taxation. Period.

In Trump's world the coronavirus is going to magically disappear. Meanwhile, he's waving his magic wand in a desperate attempt to salvage his failing campaign.

Quote for the Day: "Here you leave today and enter the world of yesterday, tomorrow, and fantasy." -Walt Disney
at August 09, 2020