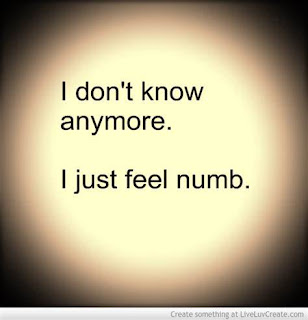 It's increasingly apparent Americans are numb from witnessing the chaos everywhere around them:

They're numb from hearing the world laugh at our autocratic and pathetic president.

They're numb to shocking news of Trump's corruption on a daily basis.

They're numb watching the Trump's regime's war on science.

They're numb because Trump's response to the coronavirus has resulted in 142,000 (and counting daily) deaths across the nation.

They're numb and divided over wearing face masks to fight COVID-19.

They're numb because Trump treats dictators like Putin and Kim like they're his best friends, and kowtows to our enemies for personal reasons.

They're numb from hearing about foreign powers influencing our elections at the behest of Trump whose invited their help to defeat his political opponent Hillary Clinton in 2016, and who asked China for political dirt against another political opponent; Joe Biden in 2020.

They're numb from witnessing Trump dismantle government agencies and discrediting inspector generals and any other oversight agencies of his foul regime.

The one thing I'm counting on is that Americans will shake their numbness off and vote in record numbers to get rid of a president whose held the nation under siege since he was sworn into office.

Quote for the Day; "Shock is when language and emotion get overwritten by trauma's numbing code." -Stewart Stafford
at July 24, 2020