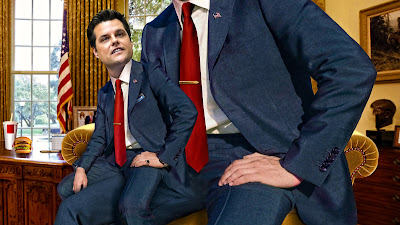 Under Trump's regime, a new breed of elected Republican officials has emerged. They're loud, bombastic, and have a flair for publicity. They lie shamelessly. They also support everything Trumps says and does.

One of Trump's most loyal subjects, Gaetz has been violating ethics rules since he slunk into office clinging to his master's ridiculously long tie.

The most recent investigation into the corrupt little creep has revealed he's been using taxpayers money (tens of thousands) to pay a limited liability company linked to a speech-writing consultant - Darren Beattie - who was ousted from the Trump Administration in direct conflict with House rules.

Beattie got kicked out after appearing at a convention known for its racist and white supremacist views. I guess he embarrassed the regime and that's why they had to cut ties.

This arrangement, runs afoul of the House gift rule, which prohibits any lawmaker, aide, and their family members from accepting gifts worth more than $50. And of course, he's illegally using taxpayer money in the scam.

To be clear, Gaetz's spending has already been under review.

The Office of Congressional Ethics recently dropped investigation into Gaetz's office rental agreement after Politico reported in April that he rented his office in Pensacola, Fla., from a longtime friend Collier Merrill whose also a political donor and policy advisor.

In this case Gaetz dodged a bullet by saying the rental deal was hashed out privately(?) and below market value. It's nice having fellow Trumpies to help cover up his crap.

Instead of cleaning out the so-called swamp in Washington, Trump has dug a deep tar pit that's sucked GOP lawmakers into it, just like Br'er Rabbit did to Br'er Fox in the Song of the South.

Quote for the Day; "The true cause of conflict in humanity is simply; decadence and greed. Both are the elements which motivate people to only think of themselves..." -Husam
Wafaei
at July 23, 2020