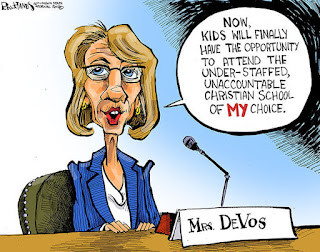 Education Secretary and Trump puppet, Betsy DeVos, doesn't give a damn about children.

She sees them as an income source for her depraved private for profit religious schools. If she gave a damn about children she wouldn't be pushing for a grand nationwide opening of schools in the height of this pandemic.

What we know about DeVos:
1) NPR reported that the DeVos Urban Leadership Initiative, formerly the Richard and Helen DeVos Foundation, has been a top contributor to the Federalist Society, prompting the nation's largest teacher's union to criticize her for spending time on political events rather than planning for a safe reopening of schools shuttered by the pandemic.

2) Betsy and her family are major Trump donors, which got her the job - despite being unqualified - in the first place.

3) Her father-in-law is a co-founder of Amway (basically a pyramid scheme) and part of a small circle of conservative billionaires who have long funded the Republican Party.

5) She's done everything she can to limit funding for public schools, and to promote private religious schools for profit.

The woman is evil. 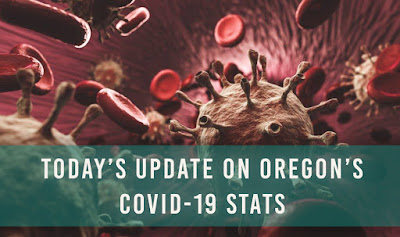 Recent virus transmission models agree with earlier evaluation - we could see anywhere from 1,100 to 7,300 cases per day by the end of this month.

We hit a daily record high of new cases Saturday with 409 reported.

Thus far, the state has reported 12,800 total cases of confirmed coronavirus, and 234 deaths.

Quote for the Day; "The only thing necessary for the triumph of evil is for good men to do nothing." -Edmund Burke
at July 15, 2020