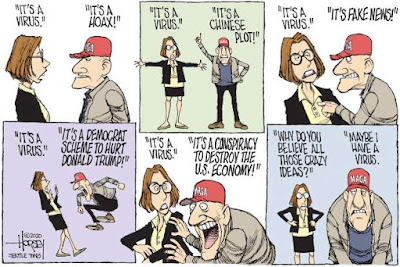 It's early to be summarizing this year, but with four months in I can't help myself.

The year started with a bang as Congress impeached Trump.

Then Trump was alerted that a deadly virus poised a major threat to the US economy, and every American life, and didn't do a damn thing about it!

Leaping into inaction, Trump stalled the scientists, healthcare professionals, and even his own team (think Navarro's report) in an effort to see if the problem would just "magically disappear."

Then the Senate acquitted Trump, and he went on a revenge tour, which continues to this day.

But, the coronavirus didn't go away and Donny had a new problem. America went on to have more cases and deaths from the coronavirus than any country in the world. And here we are... still counting. 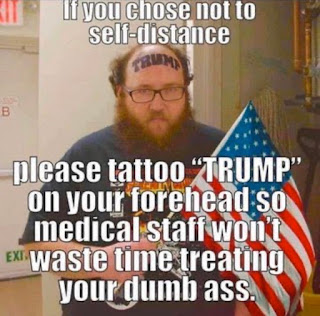 Historians will be slapping their foreheads when they read (and watch videos) of Trump protestors demanding states re-open in the middle of the pandemic.

You want crazy? 2020 will be remembered for odd shit like when a physicist was hospitalized for putting magnets up his nose and...

when the INSANE CLOWN POSSE demonstrated a better understanding of epidemiology than the president of the United States!

And the merry-go-round continues...

**The American Oil Boom ended with a whimper as shale oil markets dried up this month.

**As of this entry, there's 26 million Americans who went on unemployment - literally wiping out all the job gains since 2008

**Oh Yeah! This just happens to be a presidential election year!

We're one quarter of the way through the year after next week.

On the Homefront - Medford, Oregon
In Jackson Country, where Shirley and I, live there's been 48 confirmed cases of COVID-19 and NO DEATHS from the virus. Better yet, it's been four straight days with no new cases!

The folks around here hunkered down quickly after the governor's order to stay at home, and it seems to be working.

For the record, there's been 3,533 coronavirus cases in the state, and 78 recorded deaths. On the plus side, there's not been any new deaths statewide for two straight days.

My concern is that Oregon is among the bottom four states in testing. I don't know what to think about these official stats. Good? Bad? Ugly? I'm going to have to think about it some more in the coming days.

As I ponder the question there's another very serious threat to Jackson Country - it's been declared a local disaster due to drought conditions.

Quote for the day; "No matter how bad things are, you can always make them worse." - Randy Pausch
Q