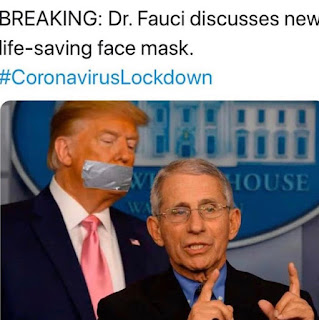 I quit watching the Task Farce briefing/aka daily campaign rallies a week ago, but a friend called and suggested I watch yesterdays spectacle...so

I tuned in to see a scene that shocked me (I didn't think that could happen in the Trump era).

Propaganda on steroids! Trump minions had put together a campaign ad and the WH press corps was forced to watch Trump's attempt to re-write history as selected videos flashed before their astonished eyes!

Attacking reality. It was the most blatant attempt at brainwashing Americans I've ever seen. By anyone. Let alone the president of the United States. It was sheer gall with a twist of rattlesnake venom.

It happened. The emperor doesn't care if he has no clothes on and the world knows it. He's without shame and drunk with power after escaping being convicted for his abuse of power by a gutless senate. Unchecked. A revenge tour against inspector generals for doing their job.

Serial liar. Cheater. Fraud. Crook. Coward and bully. An egotist like the country has never seen before. A sociopath who set out to destroy democracy - and to remake it in His Image.

He's getting worse every day. He's becoming more brazen by the hour, yet the GOP leadership remains quiet. They're. Afraid. To. Stand. Up. For. The. Country. I hope voters remember that. In November.

**Oregon is joining Washington and California to pledge to coordinate reopening from coronavirus shutdown. It's a damn good idea.

Especially since Trump thinks he can tell the states when to reopen - when in fact, the Constitution calls bullshit on his orange ass!

**Shirley and I have successfully avoided getting into too many routines by being spontaneous about our day.

That's simply done by going into the day with no plans... other than completing some "missions" (defined as almost any completion of an act).

Dishes. A dip in the hot tub. Emptying the trash. Vacuuming. Weeding the garden. Making meals. Playtime with the pets. Taking a shower. The possibilities are endless. Stir in a sense of humor and these days of confinement aren't so bad.