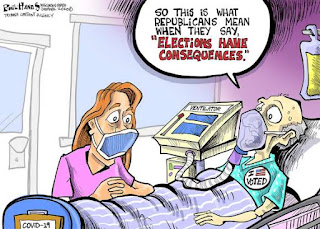 I'm having trouble trying to document what's happening daily because there's SO MUCH going on.

National and global pandemic stories of desperation seem to get worse daily. Here's a smattering:

** There's a zoo in Germany that's going to have to start feeding some of it's animals to the other animals because no funds are coming in! Hoping for a government bailout!

**Farmers are dumping milk - up to 20,000 gallons a day - In Wisconsin because of a precipitous drop on demand from schools, restaurants and food service providers.

**A group of ignorant Trumpies gathered on the steps of the Michigan capitol building with their beloved guns, to protest because they didn't like the safety orders the governor enacted to protect the people of the state.

The group was organized by a Michigan Conservative Coalition and the Michigan Freedom Fund, a DeVos (as in Education Secretary DeVos) family-linked conservative group.

**Trump's trying to stop US payments to the World Health Organization because he's decided they're going to take the blame for what he didn't do - shut down the government when warned by his own healthcare experts.

But the orange ape is in for a fight with Congress, who rightly assert he can't change funding which has already been granted by Congress.
---

On the Homefront - Medford, Oregon
**The death toll from COVID-19 has increased to 58. 1,663 cases of known virus across the state. Still only 47 cases in Jackson Country where Shirley and I live. No known deaths in the county either.

**Gov. Kate Brown announced a framework, but no dates, for loosening coronavirus restrictions.

**I was a bit under the weather yesterday, a problem with my balance and feeling dizzy and weak. No warning signs of COVID-19 however. Shirley is watching me like a hawk today. I am feeling somewhat better though.