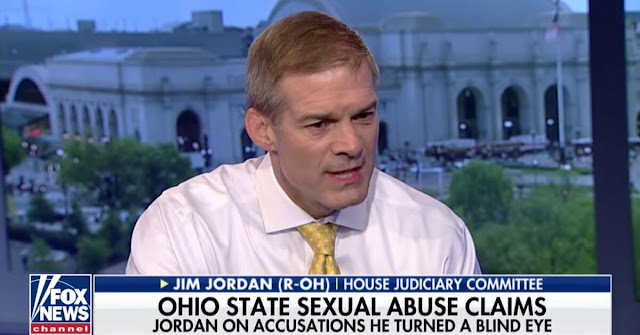 To:  Susan Collins, and those other naïve partisan Republicans who claimed Trump would be a good boy after being chastened by impeachment

Subject: Just Look at your boy now. He's on a revenge tour while violating DOJ procedures to save his buddy Roger Stone.

The optics of Trump's attacks against witnesses who testified against him in the impeachment trial are not good. Trump's base may enjoy the bloodletting, but the rest of America is watching, stunned by the viciousness of his attacks.

In a "In your face" moment, Trump got the DOJ (AG Barr) to change the proposed 7 to 9 years for Roger Stone's crimes from his own department. Four of five prosecutors immediately resigned in protest of the unprecedented move.


Rep. Jim Jordan, one of Trump's most devout brown noses, is in big trouble.

The brother of Ohio State University whistleblower Mike DiSabato told state lawmakers in a public hearing Tuesday that Jordan personally pleaded with him to intercede after DiSabato publicly accused the Republican congressman of turning a blind eye to the sexual abuse of male wrestlers by team doctor Richard Strauss.

Rep. Doug Collins, is giving the Republican Party in Georgia and Congress heartburn.

He's decided the House wasn't big enough for his ego and the senate was. His decision to run is going to complicate the path for a Republican to hold onto the seat and increase the chances where no candidate gets a majority of the vote, forcing it to a two-person runoff.

All of the Republicans and Democrats face each other in the special election as part of Georgia's election rules.

More trouble ahead for Trump as House Democrats ask Secret Service for details about it's payments to Trump's company.


Collins' career change attempt is giving Mitch McConnell a new headache in his quest to hold onto the senate majority. It illustrates growing cracks in the party.

Jordan's career is on the line, and depending what happens in the investigation, his freedom may also be on the line if he's convicted of enabling a massive cover-up.

Trump is going to be hounded with numerous court cases and oversight issues with the House prior to November.

Summary
Democrats are largely on offense in Senate races this November. They need a net gain of four seats, or three if they win the White House since the vice president would be the tie-breaking vote.

*Note: that if David Perdue and the other contested Georgia seat that Doug Collins is vying for are defeated, it'll be the first time in 20 years Georgia has had two Democratic senators.

The biggest challenge for the Republican Party this election is if Democrats turn out to vote in record numbers. Most political analysts predict they will.