Proof That Trump and Minions Are Losing Their War on Reality 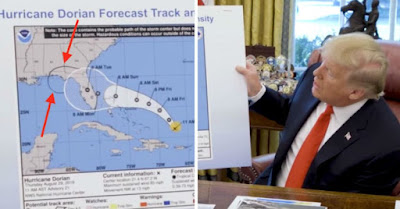 After a correction with his presidential Sharpie (see red arrows) Trump displays a weather map.

Trump and his minions are fighting a losing war in their effort to turn the tide of truth regarding their corrupt activities with layers of lies.

No lie is too small, or too big.

Trump is still refusing to acknowledge that he was wrong when he tweeted Sunday about the threat Hurricane Dorian posed to Alabama.

The National Weather Service tweeted 20 minutes after Trump's crazy claim that Alabama WAS NOT in the path of Dorian.

That didn't stop Trump who ginned up his battle with reality by showing a phony weather map where he used a Sharpie to point to Alabama, while sitting behind the Resolute Desk.

As usual, Trump took a lie and doubled down on it by persistently tweeting in the hope someone will believe him. I can't imagine how embarrassing it must be for aides who have to go along with his blatant lies and act like nothing is wrong.

When questioned by the press he claimed it was his staff's idea to stay there. That excuse might have worked had there not been a news article the day before pointing out that Pence went there at Trump's suggestion.

Just another lie for his master.


* As far as Jared Kushner's much anticipated Israeli-Palestinian peace plan... it's apparent he doesn't have one even though Trump has said he's presenting one right after the Israeli elections.

Once again, reality is biting a Trump minion on the ass. Trump's Middle East envoy, Jason Greenblatt, who was working with Kushner on the peace plan, resigned yesterday.

By all accounts, negotiations have stalled, and there's very little (if any) progress made by Trump's son-in-law. Don't expect to see a plan soon. The reality is, there never was a plan.

* In another sign that reality is closing in on the orange anus, Mother Jones reported an investigation about a mysterious $50 million debt that Trump owes to a business called Chicago Unit Acquisition LLC, which he fully owns.

Yesterday, experts referred to it as a clear case of tax fraud.