What The Hell Motivates That Squatter In The White House? 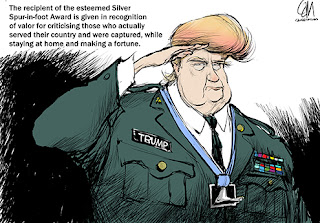 
Where did that sudden display of courage come from that landed Trump in Iraq for a quick photo op with the troops yesterday?
Trump Finally Visited The troops Overseas - And It Was An Embarrassing Mess


I suspect Melania held his tiny hand and promised to clean up any poop poo that squirted into his tightey whiteys if he'd agree to go.

The mystery is what motivates Trump at times.

On one hand, he hasn't shown any desire to visit American troops abroad since squatting in the White House two years ago.

When he failed to visit a WW I War Memorial for Americans who died in France due to the rainy weather, he made it clear there were limits on his patriotism.

But what got him to change his mind about visiting our men and women in the military around the world? Is it possible his minions, aka cabinet, convinced him too?

Did Sean Hannity or Rush Limbaugh instruct him too? He values their vile input.

Was it something as simple as being teased about his cowardice for so long it finally got under his orange skin? A way of shaking off the label, Cadet Bone Spurs?

In the end, there's no reliable way to determine what makes the orange anus act.

He can wake up in the morning and pull American troops out of Syria (without consulting anyone), or actually stop tweeting for 20 hours (a record since slithering into office) to make a surprise appearance in Iraq.