Baby Trump Visits Florida: Are You Ready For a Crazy Week? 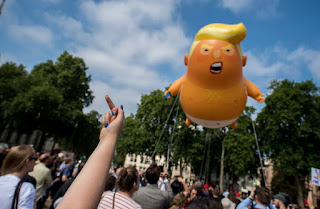 Last week's political bombshells were just a warm-up for this week's activities.

The fast track Kavanaugh confirmation hearings were temporarily derailed when a woman came out and accused him of sexual assault.

A Baby Trump balloon was sighted flying over West Palm Beach, Florida on Saturday, during a rally to mark the anniversary of Hurricane Maria striking Puerto Rico.

Trump's denial of 3000 dead from the devastating hurricane stunned people from both sides of the aisle, once again demonstrated his losing battle with reality.

But you haven't seen anything yet. Buckle up!

Today a federal judge will decide whether Stormy Daniel's defamation case against Trump will go forward. If the judge allows it, Trump will be forced to testify.

The partisan spin masters will be working overtime finalizing a proposed hearing (that could change on a dime) for Thursday.

Trump will be addressing (and almost certainly berating) world leaders in New York on Tuesday during a United Nations General Assembly.

But the real drama will be on Wednesday, when Trump is expected to chair a meeting of the United Nations Security Council.

The 15 member panel security council will probably be a case of countries playing it cool and strenuously avoiding offending Trump. However, Bolivia isn't going to play that game and is expected to piss Trump off.

It really boils down to Trump himself. Will he stay on script and follow protocol as "President of the Security Council?"

If everything sticks to the script on Thursday, the Senate Judiciary Committee will hear Brett Kavanaugh and Dr. Ford's comments.

Don't be surprised if Thursday arrives and everything isn't ready to go.

This confirmation battle is haunted by the ghost of Anita Hill, and the uphill battle she faced against a partisan group of Senators who already made their mind him to confirm Thomas and ignore Hill.

The specter of that happening again has the Republicans trying to change some optics. Like having a female outside council ask questions instead of the 11 angry white Republican men.

As for Friday...if past Fridays are any indicator, there's sure to be some new bombs dropped onto the political landscape for people to consider over the weekend.