Where Have All The Republicans Gone, Long Time Passing? 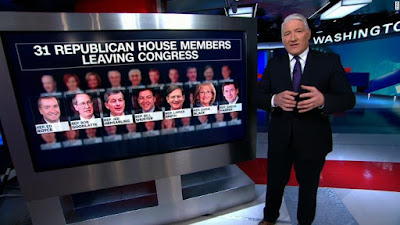 Today, I'm asking where are all the Republicans going?

Those two left just a day after House Majority Leader Paul Ryan dropped a bombshell and announced his departure; saying he's had enough, and wants to be with his family.

Florida (R) Rep. Dennis Ross decided not to run for another term, because he wanted to spend more time with his family too.

There's a couple of reasons why so many Republicans are retiring. History tells us that after a new president wins, their party usually doesn't fair well in the next election.

The other reason is Trump.

Seriously, who can stand working with a mean moron like Trump? He's shown he's against just about everything the traditional Republican Party stands for.

When can you remember the last time Republicans agreed to increase the national debt by over 1.2 trillion dollars? It goes against everything conservative Republicans believe.

The reason why is the traditional Republican Party has been shattered by the Trump Republicans, who are nothing more than puppets for our Liar-In-Chief.

Trump's supporters will follow him over a cliff if he asks them to. Don't be surprised if that happens soon for the remaining Republicans in Congress.

It's the season of the Trump, and real conservative lawmakers are feeling threatened.

And, well they should. Political pundits from both sides of the aisle are predicting a Blue Wave in the November midterm elections.

The Senate and the House are both up for grabs.

Across America, true conservatives are asking, "Where has the Republican Party gone?"