It's 'Stormy' Out, and Trump is Looking for an Umbrella 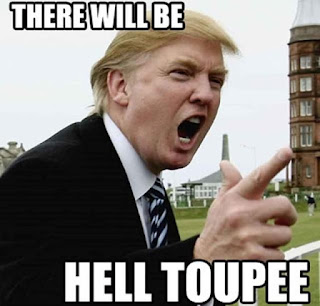 From day one, Trump's reign on the land has felt like a biblical curse.

Where once we had a working democracy, we now have chaos; as Trump assaults the very institutions our government depends on.

Nothing is exempt from his biblical temper tantrums. The Department of Justice. The FBI. The Supreme Court. The 9th District Appeals Court. The list goes on.

So, it's no surprise that people rejoice when Trump is thwarted in the courts, or by laws of the land.

Like the bad kings in the Bible, when Trump is finally unseated, he and his heirs will pay an enormous price for their evil ways.

The country waits every week - watching Trump's every move, hoping justice will win out in the end.

Hopes of being free from Trump's  noxious regime are getting closer every day however.

Special Counsel Mueller is hovering over Trump, as he goes after his cronies during the investigation for his campaign coordination with Russia.

Her lawyer opened a Pandora's Box into Trump's world when he started commenting on his client getting hush money for not telling the story of her affair with Trump, days before the election.

Two days ago, the FBI raided Trump's personal lawyer, Michael Cohen's office, home, and apartment. He was the one who paid Stormy $130,000.

Information leaking out after the raids (which included his cell phones) makes one thing clear; authorities have transcripts of Trump and Cohen talking about how to get rid of the threat Daniels posed.

Pieces of one puzzle are falling into place. Trump and Cohen are both lying about Daniels.

When the hammer comes down, it's going to be for illegal campaign contributions - a violation of federal law. For Cohen it doesn't stop there; he's also facing bank fraud.

For Trump, it means disaster.

The other puzzle falling into place, is the Russian investigation. Some pundits believe it will be complete before the end of the year... if Trump doesn't fire him first.

There's more than dark clouds over Trump's head right now. It's raining and Stormy. The weather is only going to get worse in the days and months ahead.