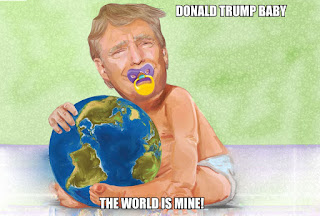 After a year of going through baby-sitters, Donny has shed whatever restraints they had over him.

White House staffers are fleeing, like rats fleeing a sinking ship, amidst the chaos.

Chief babysitter, John Kelly, has gone from being a war hero to changing Donny's diapers and ignoring the stench.

The latest news from the Oval Office nursery:

The man baby looks like he's going to get his parade after all, but some brave adults have put their foot down when it comes to tanks and heavy equipment tearing up Pennsylvania Avenue.

He's increasing his 'executive time," that part of the day when he watches Fox and Friends, tweets crazy announcements, and passes out lies like candy to his base.

Baby Donny has everybody guessing what he's going to do, or say, daily.

From imposing insane tariffs, to announcing he's meeting with the North Korean dictator Kim - something no American president has done (for good reason) yet, he's thriving without supervision.

In Isaiah 11:6-9 of the Bible, there's a sentence referring to children leading the way to peace. Real world. Trump is not the child who will bring peace to the planet.

The only truthful thing baby Donny has ever said was when he promised to bring change to Washington. He brought change alright.

What was once a barely functioning Congress is now a total collection of cowards who can't (or don't want to) shed the corruption he brought to town.

But his days are numbered.

Meanwhile, Donny is sitting high in his height chair laughing at the adults!