Didn't You Use To Work In The White House? And, Other Questions Of The Day 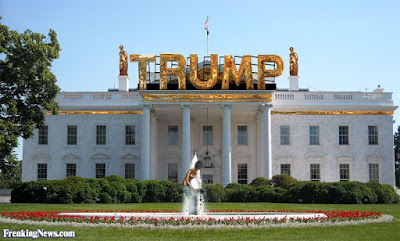 "Excuse me sir! Didn't you use to work in the White House? Aren't you John McEntee?"

"Wait a minute viewers! I think I see Rex Tillerson! Yep, that's him on the North Lawn! Boy he sure looks pissed off! Let's see if we can get a statement from him.

"Excuse me, Mr. Secretary of State, can I ask you a quick question?"

"Better make it quick, I'm outa this shithole for good!"

"That moron-in-charge fired me this morning! He claims I didn't kiss his ass often enough."

"Whose going to take your place?"

"Then whose going to take Pompeo's job as CIA chief?"

"Well viewers, you heard it here. Another White House exodus."

"Hey buddy, I've got some news for you."

"As in the president of CBS News?"

"That's right. I just want to let you know my network is working on verifying information provided by Stormy Daniels before we release an interview with her on 60 Minutes."

"Can you tell us when to expect this bombshell?"

"This has been quit an exciting day so far viewers. You never know who you'll see strolling along on Pennsylvania Avenue.
"Hold on... I think I see Yahoo News chief investigative correspondent Michael Isikoff and Mother Jones Washington bureau chief David Corn coming up the street!

"They released their new book "Russian Roulette: The Inside Story of Putin's War on America and the Election of Donald Trump" yesterday. Let's see if we can have a moment with them.

"Excuse me gentleman! Do you have anything to say about your new book?"

Pausing for a moment the two men stopped directly in front of the White House. Then they both gave a single finger salute and slowly walked away.

"That's a wrap for the day!

"In the upcoming segments we hope to see the rest of Trump's original cabinet - Jeff Sessions David Shulken, H.R.McMaster, Ryan Zinke Scott Pruitt, Ben Carson, John Kelly, and Betsy DeVos, before they're kicked out too.

I hope you tune in next week to see whose coming and going on Pennsylvania Avenue!"