Another Day in TrumpLand: Cold Hearted Complaints From POTUS 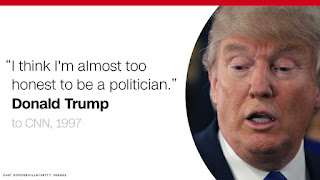 My morning coffee fix is more enjoyable than usual right now because the temperatures outside have plunged here in Medford, Oregon. It's 31 degrees.

Cold morning. Good coffee. What more could a person ask for?

Speaking of cold; have you heard some of Trump's most recent remarks (rants)?

He's threatening to quit helping Puerto Rico recover from the devastating hurricane that crippled the island. Why? For one big reason; Puerto Rican's can't vote.

"I've had just about the most legislation passed of any president, in a nine-month period, that's ever served. We had over 50 bills passed. I'm not talking about executive orders only, which are very important. I'm talking about bills."

This is a blatant lie that anyone with a history book can refute.

"Well I've gotten very high marks for the hurricanes," Trump told Forbes. This claim, of course, is a patented lie.

In three tweets, Trump once again blamed Puerto Rico for its financial and infrastructure troubles, saying a “total lack of accountability” from its leaders made way for the Maria devastation.

“Electric and all infrastructure was disaster before hurricanes,” he wrote.

“Congress to decide how much to spend.......We cannot keep FEMA, the Military & the First Responders, who have been amazing (under the most difficult circumstances) in P.R. forever!” Trump tweeted.

His cold-hearted complaints drew immediate disgust and rebukes from other lawmakers and most Americans.

Just another day in Trump's America.