The Trump Era: 'Divided We Fall' 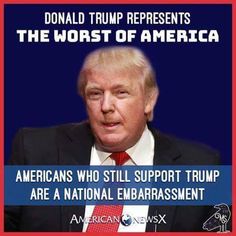 I just finished reading an article written by a group of professional psychotherapists who are troubled by the environment of rampant dishonesty in the White House.

The group is also very concerned about the daily disregard of civil and social norms by the president, and the threats he makes against vulnerable people.

* Policies and rhetoric that undermine progress on the environment

* Thus far, Trump's agenda against race and gender has proven toxic and millions of Americans are feeling disenfranchised.

Those Republicans in Congress who are enabling the Liar-In-Chief, are complicit in Trump's hateful agenda.

Even though they know he's a world class liar, they have been trying to dismantle our nations health care system just to score some vague ideological points.

However, I have noticed the pushback from a majority of Americans, from pro athletes to women marching for equality.

I have hope this country will survive Trump's assault on everything we stand for. There's too many good people in this country who want to reunite America.

They can start by voting in 2018, and getting The House of Representatives back from Republican control.

When the 2020 presidential elections roll around hopefully we'll have a record turnout to take Trump out of office (that is if he's still there, and doesn't get impeached and indicted for obstruction of justice and colluding with the Russians).