Snakes Stories and a Piss-Poor President 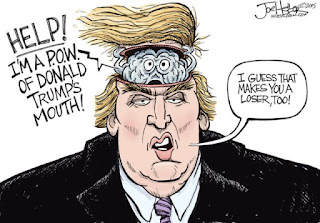 How are you doing?

I'm sitting here at my keyboard pecking away some thoughts for the day, while sipping some cannabis infused coffee.

Yes. Wake and bake. It's great to be retired. It would be even greater if I wasn't an old coot now!

Did you see that story in the St. Louis Dispatch about the woman who was bitten by a copperhead snake while eating in a restaurant?

Talk about an appetite suppressant! The snake bit her foot and held on while she tried to kick it off! Her boyfriend and son stomped on it, sending it to snake heaven.

It's really sad that we have a president who likes to pick fights with people, or organizations, on twitter. The clown wasn't even aware that Puerto Rico is an American territory when he told the governor to talk with his leader about getting help!

Reportedly he couldn't understand how an "Island of Spics" could be full of Americans with the right to go back and forth to the mainland anytime they wanted.

Trump complained Puerto Rican refugees that are flocking to the mainland are setting a bad optic for illegal Mexicans who will sneak in with them.

It's enough to make a person puke. How did we ever get such a bastard for a president?

Another snake whose made the news, showed up in an 88-year old man's toilet.

The North Carolina man asked his neighbor to help get rid of the snake.

All I can say is that neighbor must have been his best friend, or a relative, because he used his bare hands to pull a six-foot snake out of that toilet bowl.

Try to imagine your a customer at an auto parts store and you have to suddenly take a dump. You lift the toilet seat and see...a friggin Python!

The male store owners have said they caught that bad boy on camera lurking there twice. My question is were they looking for a snake, or women dropping their drawers?