RIP: The Bad Boy Who Became a Champion 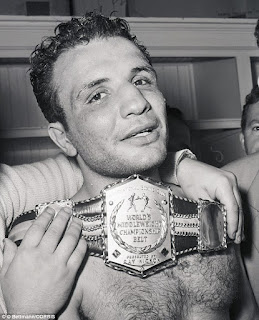 As a boxing fan, I'm feeling kind of nostalgic today.

A great champion passed away yesterday.

Let me tell you a little bit about him.

He grew up in a rough neighborhood in New York City's Bronx borough.

He was beaten up one day, and when he went home his abusive father gave him an ice pick to defend himself with.

Turns out the kid had a punch like dynamite and didn't need the ice pick.

Soon he was fighting other neighborhood boys in matches that adults bet on and ended up at a juvenile facility for attempting to rob a jewelry store.

As an adult, he was abusive to women and once severely beat his wife Vicki and his best friend after hearing they were having an affair.

Although he refused to take on a mob-connected manager he did agree to throw his 1937 match against Billy Fox for a shot at the World Middleweight title.

In 1949, he got his big chance and fought Marcel Cerdan and won the Middleweight crown. He held it for two years before losing it to Sugar Ray Robinson.

Martin Scorsese's 1980 movie "Raging Bull" was based upon his autobiography.

In case you still haven't guessed who I'm talking about it's Jake LaMotta.

Ring Magazine ranks him 52nd on its list of the 80 best fighters of the previous 80 years.