Who Do You Believe? Putin or Trump's Account Of What Was Said at Their G-20 Tete-a-Tete? 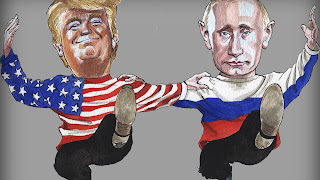 One true, the other a lie.

Which story should be believed?

Putin's take on the G-20 Summit meeting between the two men was that Donny believed every word he said.

Trump's version is he put Putin in his place while asking hard questions about election meddling in last year's presidential elections.

Putin hates America. Putin has been our enemy for the past 18 years. It's no secret that he's been directing a cyber war against Americans, and the U.S. infrastructure.

American intelligence agencies said there was no doubt Putin helped Donny get elected.

So, should we believe Putin's version about Donny accepting his word about not hacking the election?

Should we accept the word of the most prolific liar ever to sit in the Oval Office?

Just last week Trump lied about what was said between him and the President of Romania.

Trump hosted a relatively brief press conference at the White House with Romania’s Klaus Iohannis, and the two presidents were asked if they discussed the visa waiver program for Romania.

A couple of seconds later, Iohannis, who has his own domestic politics to consider, said the opposite, telling reporters that they did discuss it: Iohannis brought up the issue during his White House meeting, Trump’s denial moments earlier notwithstanding.

In other words, the American president wasn’t telling the truth – which, when it comes to Trump, is a familiar problem.

The Washington Post, for example, reported the other day on a sworn deposition Trump gave in 2007, when he was confronted with a series of public falsehoods:

"For two straight days, Trump was asked question after question that touched on the same theme: Trump’s honesty.

The lawyers confronted the mogul with his past statements — and with his company’s internal documents, which often showed those statements had been incorrect or invented.

The lawyers were relentless. Trump, the bigger-than-life mogul, was vulnerable — cornered, out-prepared and under oath.

They caught him lying 30 times! Trump had misstated sales at his condo buildings. Inflated the price of membership at one of his golf clubs. Overstated the depth of his past debts and the number of his employees.

When caught, Trump sometimes blamed others for the error or explained that the untrue thing really was true, in his mind, because he saw the situation more positively than others did."

Who do you believe?

Related: McCain: Putin "Got Away" With Interference in U.S. Election