Trump's Cronyism Contributes To Chaos in the White House 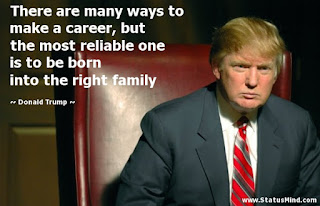 I'm waiting for Trump to appoint his 10-year-old son Barron to a government position.

He's managed to find key power positions for those family members that can stomach working for him.

Democrats cry "cronyism." Republicans swallow their dignities and claim whatever the president wants to do is legal... that there are no laws that can be used against their orange-faced master.

How many family members did President Obama appoint to key positions in the government?

The answer is zero. Nada. None. Instead he picked qualified candidates that knew what they were doing. That concept never entered Trump's skull.

So blatant cronyism crept into the White House amid the chaos, the Russian hacking scandal, and no game plan on what to do in Afghanistan.

Watching Ivanka Trump sit down with world leaders - in Daddy's place at the G-20 Summit - showed the world that America was no different than a Banana Republic when it comes to dictators elevating their families into positions of power.

The only thing Ivanka knew about the topic of African Migration and Health was that she (actually the U.S. government came up with the $50 million donation thanks to Daddy) and the World Bank had come up with a fund to finance women entrepreneurs in poor countries.

Maxine Waters, a Democratic congresswoman from California, told MSNBC:
“It does not make good sense. Here you have the president of the United States at the G-20, representing us as the leader of the free world, and so he’s going to play politics and give his daughter a chance to have a place in the sun and to be seen at a very important meeting that she knows nothing about."
It makes sense to Trump however. In his mind he wasn't elected President, as much as a dictator who can condone cronyism when it comes to his family and friends.
Time for me to walk on down the road...
at July 12, 2017